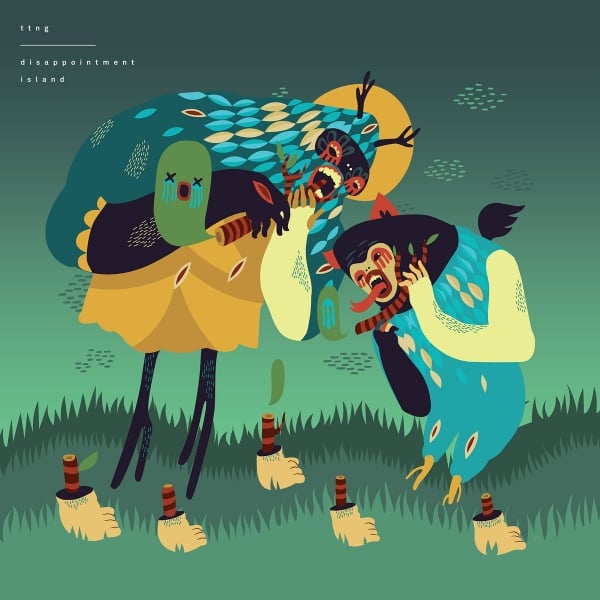 In a recent interview with Noisey, vocalist and bassist Henry Tremain downplayed the title, simply noting that it's "pretty funny" calling an album Disappointment Island. That awkward humbleness is classic Tremain though, and in the last record 13.0.0.0.0 there was an explicit self-awareness as he took up the role of frontman. Take for instance "+3 Awesomeness Repels Water" (their song titles haven't got any less cryptic): “All eyes focused on the tongue tied / And it's impossible, impossible to hide / Blurting out the lines / From the front of the stage out in the broad daylight / Everything’s in plain sight / And it's impossible, impossible to hide”.

Whatever anxieties Tremain faced introspectively however are allayed not only by the band's perseverance through various lineup changes but more importantly their ability to consequently present a record that sounds comfortable with this change and yet coherently ‘TTNG’ as a whole. It’s not that 13.0.0.0.0 was a bad record, but it felt more of a piecing together of material with a couple of intermissions thrown into the mix. Disappointment Island seems a result of time and refinement and from start to finish, bar a few lulls in excitement, it boasts masterful songwriting.

Tremain’s choice of vocal cadences are again what really stand out above the consistently mesmerising guitars and drums of brothers Chris and Tim Collis; often unexpected and always appropriate, they glaze the Collis-core with emotive and actually quite accessible melodies, as in the first single “A Chase of Sorts” and “Consoling Ghosts”, a downright bittersweet number and an early highlight.

Whilst the band have always sonically had a close affinity with American emo pioneers such as American Football and Colossal, Disappointment Island on the whole sits even closer to this canon, perhaps best exemplified by “In Praise of Idleness” and the stunning closer “Open Palms”. This isn’t much of a surprise given that it was recorded in Chicago by Greg Norman (Pelican, Russian Circles), and in recent years the band have had a growing popularity stateside, supporting Foxing and The World Is A Beautiful Place & I Am No Longer Afraid To Die last November. This sound suits TTNG, and always had really, but it feels all the more comfortable and at home with Dissapointment Island, and jokes aside, proves the title really is a misnomer.